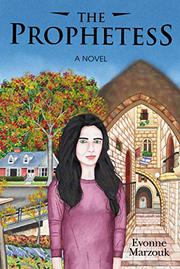 Rachel doesn’t think of herself as an especially observant Jew, but when her 87-year-old Orthodox grandfather dies, her relationship to spirituality begins to shift.

Although her extended family practices Orthodox Judaism, Rachel’s mother became less observant when she met Rachel’s father, who is not religious. For Rachel and her older sister, Beth, a dedicated dancer, Judaism has not been their priority. The Baltimore high school student prioritizes her academics, writing poetry, and close female friendships. However, Rachel starts to experience visions—direct messages from G-d—and begins to uncover a mystical power deep within herself. After learning more about Judaism from Yonatan, an intense, charismatic stranger she meets at synagogue, Rachel starts to meditate, accessing her gifts more deeply until she goes to Israel, where she actualizes her powers. Toggling between Rachel’s daily life and her visions, this story exquisitely accomplishes a partnership between the divine and the quotidian. Debut author Marzouk integrates Jewish practice, philosophy, and mysticism into a complex yet accessible coming-of-age story. Though Rachel’s visions are described in less rich detail and language than her worldly life, the excitement over her realizing of her powers carries readers through the character-driven narrative.

Fuses the mystical past with a teenager’s complicated present through a richly rendered world of Jewish prayer and ritual.