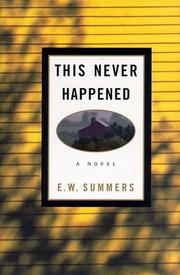 Summers's entry in the dysfunctional-family sweepstakes starts with a bang when fragile painter Claire Brown shoots her husband, letting all manner of demons out of the closet. But the focus of the story isn't Claire or the late (and aptly named) John Brown; it's the narrator, Claire's big brother Richard Cory Hayes, who has always wanted to think of himself as her protector and has always failed her. Now that he's got one last chance to help, Richard phones a lawyer, places Claire in the New York Psychiatric Institute, then begins the real work of confronting the childhood memories that might provide her legal defense. He recalls his sister Tina's suicide at age 20, his mocking brother Max's flight to San Francisco's gay community, his sister Elizabeth's disappearance into a seminary. And he struggles to pierce the tight-knit veil of italicized injunctions (Honor thy father and mother/don't get angry, etc.) he's woven around such painful matters as his alcoholic mother, his obstetrician father, and his memories of the family's seasonal farm in the Blue Ridge Mountains—the only place, he realizes with a start, where he ever felt loved by his father, the only place he wasn't afraid of him. It's not giving too much away to say that Dr. Jack Hayes was, and is, a monster even by the standards of the genre, and Summers, in her first novel, excels in limning his ruthless theft of his children's innocence and Richard's epic battle to reclaim his life from the defenses that have shut his memories down. Yet such is the weight of the genre (its hand even heavier than Jack Hayes's) that the monstrous revelations so long suggested seem eminently predictable and so, fatally, unmoving—raising the question of just how a contemporary novelist could bring urgency to the overworked theme of child abuse without seeming merely shrill. Readers who haven't already overdosed on family angst, though, or who can't get enough of it, will find Richard's struggles properly gripping.