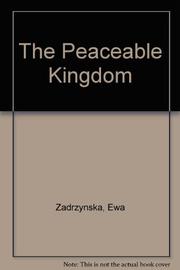 A curious, rather long fable about three animals (a lion, a leopard, and a wolf) who come out of Edward Hicks's painting of The Peaceable Kingdom in the Brooklyn Museum and cause a stir in the nearby botanical garden. While the animals huddle together, wide-eyed, a seven-year-old observes that ``They're beautiful and they're scared....We have to help them,'' but adults are terrified and the police prepare to shoot. The mayor, the press, and famous professors get into the debate about what to do; no one knows what to make of these creatures, which are evidently not predatory. Finally, after a little boy who has seen the animals in the museum recognizes them, the children from the painting are fetched to take the animals back into it. The truants are ready, but sad; they had thought that surely by now the world, too, would be peaceable. Not yet—but everyone is moved by their tears. An intriguing entrÇe into both the Quaker painter's art and its subject. Olbinski's spare, classically constructed settings harmonize nicely with his renderings of Hicks's figures. Reproduction of the painting and list of Hicks's 18 other variations on it; note. (Picture book. 5-11)