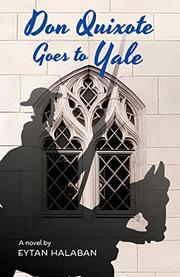 A Don Quixote fan at Yale University discovers a letter that speaks of hidden treasure in Spain in this thriller.

Michael Porter, a senior literature student at Yale, has become somewhat obsessed with Don Quixote. Michael pores through Cervantes’ novel in both Spanish and English and mopes around campus, often making conversation with his imaginary friend, Boomie. Michael’s girlfriend, Liz Mansfield, a wealthy student interested in finance, is hoping that after graduation Michael will join her and work at Merrill Lynch. As those jobs will be arranged by Liz’s dad, Michael is not overly excited about the prospect; nor is he looking forward to the couple’s trip to St. Thomas. Michael thinks that there are clues in Don Quixote to hidden riches and pretends to be a graduate student to look through some Cervantes documents at the library. He confides in Liz, but she tells him, “The reality is that we’re graduating in two months, and fiction has to take a backseat to life.” She insists, along with professor Colin Edwards, that fiction isn’t real and that the Man of La Mancha has not provided a treasure map. But in the depths of the Beinecke Library, Michael finds an unknown letter, stuck to the back of another, that purports to give the booty’s location. Lost in a literary fantasy, Michael skips the trip to St. Thomas and heads for Spain. Hot on his trail are Liz, the professor, and even Liz’s parents, and Michael soon realizes that he is not the only party in a desperate search for the loot. Halaban’s (The Vermeer Conspiracy, 2015, etc.) novel is a fun and lighthearted adventure that is definitely smart but doesn’t take itself too seriously. Nestled in the comfortable halls of the English Department, Michael’s literary knowledge and his fantasies have become one, and the real-life peril appears in Spain from such eclectic villains as an old forger, knife-wielding monks, and descendants of the Aztecs. The third act, however, goes on for far too long and becomes too crowded with characters. But overall, this is an enjoyable story that offers Gothic elements and archaic intrigue in a search for buried secrets that may or may not exist.

An amusing yarn about a student whose love of literature takes him on a dangerous journey.