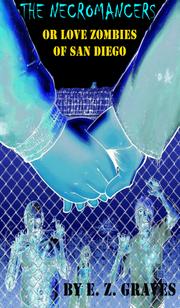 THE NECROMANCERS OR LOVE ZOMBIES OF SAN DIEGO

When a mysterious zombie virus threatens the world, it’s up to teenage “love zombies” to stop it.

San Diego teenager Josh is a dead “love zombie” who kills bad zombies; he also quotes Jesus, Nietzsche and Jung. In his first-person narrative with hints of pedantry, Josh surmises that the zombie virus spread quickly because the no-taxes government shredded the social safety net, leading to “open class warfare.” “[T]he dead virus was the ultimate catastrophe to hit us in our dens of poverty,” he says. Greedy agribusinesses, pollution, genetic engineering, the Iraq War, Mexican drug cartels, a mad scientist and a love zombie Bill of Rights mix into the tale of the walking dead. When it comes to gross-out, graphic violence, Musgrave supplies enough jugular-ripping, entrails-feasting carnage to satisfy any fan of the genre. There are ample weaponry details, too, from kosher slaughtering knives to a sword “modeled after the ancient falcata used by Iberian mercenaries.” Yet there’s also leavening humor, as well as unexpectedly resonant, emotional moments: When Josh drives a car and feels the steering wheel “smooth in my hands,” he says, “You don’t know what it means for us undead to be able to do something so human. I felt like I was one step closer, as Pinocchio would say, to being a real boy.” In this humorous, at times overdone gorefest for young adults, less could be more: A football game is played with metal batons, truncheons and Tasers; and drone zombies drop their pants in service to an enormous half-human, half-bee, egg-laying zombie queen. The professorial tone can also be an intermittent distraction: Do readers need to be told that Frank Baum was the author of The Wizard of Oz and that he called a La Jolla sea cave “Sunny Jim” after “a cartoon mascot” for a 1920s-era cereal? Still, the love zombies’ satisfying triumph reaches icky levels of bloodletting that fans of the genre will appreciate. A vampire sequel looms on the horizon.