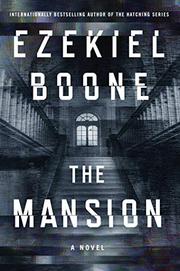 A crestfallen engineer reluctantly agrees to rejoin his former partner to troubleshoot a glitch-y artificial intelligence.

There’s a heavy dose of...let’s call it homage...in this spooky ghost story that squeezes in an alcoholic creator, his terrified wife, two psychic children, and a macabre mansion located far from civilization. All that’s missing is a little “redrum.” Fortunately, Boone (Zero Day, 2018, etc.) is a terrific writer and, despite heavy shades of Stephen King’s masterpiece The Shining, turns in a gripping horror novel that uses technology and psychological terror to alarming effect. The story: A decade or so ago, young programmers Billy Stafford and Shawn Eagle left college to hole up in a cabin near the Eagle family’s long-abandoned mansion in a remote part of upstate New York. Their goal: to develop a cutting-edge artificial intelligence. Of course, there’s a girl, Emily Wiggins, who ultimately leaves Shawn for Billy, forcing the band to break up. In the present day, Billy is a fragile, brittle alcoholic swimming in debt, barely hanging on to his remaining grace: his now-wife Emily. He’s suspicious when Shawn, who’s now a multibillionaire from the computing language Billy helped create, offers him a job. It turns out that Shawn has rebuilt his family’s mansion, complete with “Nellie,” the cutting-edge AI that Billy helped bring into existence. But the “ghost in the machine” is deeply, dangerously buggy. Billy and Emily move into the mansion to help decode Nellie’s developing psyche. (Narrator voice: Bad things happen). If there’s a drawback to Boone’s story, it’s that the ménage à trois at the story’s center is composed of three pretty miserable individuals: a boy genius with a god complex; an addict with an inferiority complex, deep-seated rage, and severe guilt over a buried secret; and the girl who wonders if she chose the wrong horse. Regardless, it’s a richly composed, very scary thriller that would be welcome squeezed between Neal Stephenson and Chuck Wendig on your bookshelf.

A ghost story that could be described as the Overlook Hotel with Alexa onboard but is, thankfully, frightening in its own right.