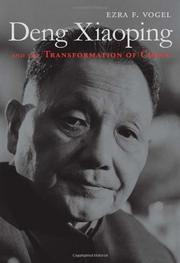 DENG XIAOPING AND THE TRANSFORMATION OF CHINA

A thorough picking-over of Deng Xiaoping’s record and accomplishments, setting him firmly as the linchpin linking an antiquated authoritative thinking to modern growth and acceleration.

With Deng’s accession to preeminence in 1978, China was still very much in the throes of closed thinking and hostility to the imperialist West, reeling from internal wounds inflicted by Mao Zedong during the Cultural Revolution and choked by centralized control. In this well-considered and -researched study, Vogel, former director of Harvard’s Asia Center, portrays the whole remarkable character: from early student worker in France in the 1920s turned communist revolutionary, fired by imperialist humiliations and determined to help build a rich and strong China; to Mao’s capable tool in constructing a coalescent communist base and, by turns, Mao’s builder, finance minister and foreign and general secretary during the ’50s and ’60s. Indeed, Deng proved to be Mao’s indispensable “implementer,” to the extent of supporting Mao’s attack on outspoken intellectuals during the Hundred Flowers period and obediently carrying out Mao’s disastrous Great Leap Forward. Yet Deng’s reservations would render him purged and disgraced twice by Mao: during the early Cultural Revolution, then again in 1976, when Deng’s efforts at consolidation and reform (encouraging Western support, learning about modernization of industry and science and reviving higher education) were “placed in cold storage” because he was suspected of designs to seize power and restore capitalism. Under Mao’s successor Hua Guofeng, then as premier in his own right, Deng’s reforms in science, technology and education proved the impetus for the modernization that would propel China forward. His willingness to seek Western expertise and open to other countries, “emancipate minds,” encourage initiative and meritocracy and create special zones for attracting foreign investment have produced today’s economic juggernaut, yet his firm grip on the Communist party line also resulted in the tragedy of Tiananmen in 1989. Deng’s policy of staving off democratic reform by economic growth may last only so long. Vogel meticulously considers all facets of this complex leader for an elucidating—and quite hefty—study.