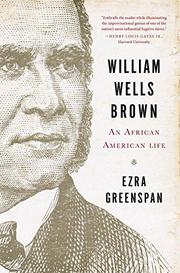 A scholar fills in the gaps in the life of a former slave who became one of the most famous African-Americans of the 19th century.

Greenspan (English/Southern Methodist Univ.; editor: William Wells Brown: A Reader, 2008, etc.) mined the archives to discover how William Wells Brown (a name adopted long after his birth) rose from a nondescript slave probably born in 1814 to become a man of letters, not to mention a medical doctor, before his death in 1884. During the later decades of his life, Brown was the equal of Frederick Douglass as an influential African-American polymath. Like Douglass, Brown crusaded for civil rights. Even after he had won esteem and could live comfortably, he would travel alone to the Deep South, knowing he would be harassed and possibly even murdered. Greenspan is no hagiographer. He understands, for example, that Brown's written works (most famously the novel Clotel) are far from canonical. But the author is openly admiring, and rightly so, of Brown's daring escape from slavery, self-education, powerful public speaking on the anti-slavery circuit, creative approach to the civil rights campaign and efforts to win public office through candidacy in legitimate elections. During the 19th century, the lives of slaves yielded almost no reliable documentation, so Greenspan immersed himself in pre–Civil War chronicles of slave culture to calculate the most likely circumstances of Brown's life. The author’s informed speculation offers a window not only into Brown's suffering and rise, but also the travails (and occasional triumphs) of countless slaves who tried to use their freedom wisely. Greenspan ably navigates Brown’s life and demonstrates how he became a problem to both his slave masters and to any other bigots who could not fathom such intelligence in a lowly slave from Kentucky.

A solid biography of a deserving subject.