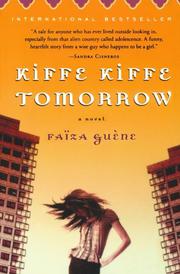 Fifteen-year-old Doria lives with her illiterate mother in a crummy, rundown housing project. They have been at the mercy of nosy social workers since Doria’s father left them to return to Morocco six months before. The Beard, as she calls him, wanted a son (“for his pride, his reputation, the family honor, and I’m sure lots of other stupid reasons”), and her mother couldn’t have any more children. At the moment, his abandoned family’s mektoub (destiny) seems to consist of getting along on welfare and secondhand clothing. Doria barely scrapes by at school, where apathetic teachers dish out unengaging work. Mom cleans rooms at the dreary Formula 1 Motel, answering to the generic ethnic name of Fatma even though her real name is Yasmina. Doria can only talk to two people: Mme Burlaud, the school-mandated psychologist she sees every Monday, and Hamoudi, an out-of-work young man who smokes spliff and deals drugs but has a caring, protective way with the girl. She and her mother also occasionally visit an Algerian friend they call Aunt Zohra—a “real woman,” according to Doria, because she is “strong” and can even deal with her husband spending six months each year back in the old country with a second wife. Despite her gloomy prospects, Doria refuses to be bitter and even finds some redeeming qualities in “lame-o” Nabil, who comes over to help with her civics homework. Slowly, things begin to change: Her mother leaves the motel after a strike and begins taking classes in English; Hamoudi falls in love with a single-mom tenant. And as for Doria, her luck might be lousy, but she’s determined that her fate won’t be.

An empowering new voice transforms kif-kif—same old, same old—into kiffer, something to be crazy about.