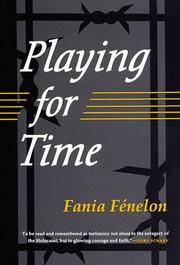 Playing for Time is Fania Fenelon's story of her ten months in the women's orchestra at Birkenau, the Auschwitz extermination camp, where, like a musical Scheherazade (""My Fairy-Tale Reprieve""?), she sang and scored music to--in every sense--keep the wobbly group alive. Their function: to pipe their fellow-prisoners off to work in the morning and home at night, and to entertain the SS: after each ""selection"" of inmates for the ovens, German officers withdrew to the music block to hear sentimental tunes. (Favorite of Lagerfuhrerein Mandel, the orchestra's sponsor, was Madame Butterfly.) The situation calls for a Cynthia Ozick but here it's played for pathos like one of those movies-they-don't-make-anymore. As the curtains part, our heroine, French-Jewish Fania, is down with typhus and breathing her last (""Don't die, my little singer,"" intones the SS man) but she rises at the arrival of British troops to sing the ""MarseillAise"" and--for the BBC--""God Save the King"" and, by gospodin, the ""Internationale."" Before deportation, this multilingual prodigy--talented singer, accomplished pianist, sensitive and resourceful orchestrator--performed in Paris nightclubs for German occupation troops. To the extent that one wants to credit her story, it's the familiar one of degradation, depravity, and eventual madness among the internees; of the few who boldly defy the SS--though to no purpose, usually, but to salve their pride; of orchestra leader Alma RosÃ‰, daughter of the Berlin Opera orchestra's concertmaster, niece of Gustav Mahler, whose greatest moment--as a German (Jew) and a musician--is playing for Heinrich Himmler. Yes, irony piles upon irony, but with such crushing banality and ersatz introspection as to turn even the moral issues into pulp.