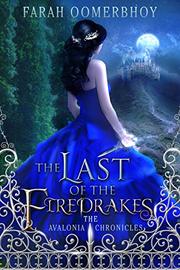 The Last of the Firedrakes

An orphan discovers her royal roots in the first book of Oomerbhoy’s debut YA fantasy series.

Aurora Darlington is a 16-year-old orphan living with an extended family that seems to despise her existence. If there were a closet under the stairs, she’d be living in it. Aurora’s life is turned upside down when she finds herself kidnapped and transported to the magical kingdom of Avalonia—an alternate world in which Aurora is a princess. She’s also a mage and one of the fae. Unfortunately for Aurora, her claim to the family throne and her incredible powers make her an attractive target. The evil Queen Morgana is hunting Aurora, hoping to extinguish the last of the Firedrake dynasty. Aurora finds safe haven with her birth family, makes new friends, and encounters a host of mythical creatures to help. She also attends a school for magic, where she begins to get a handle on her power. As she learns more and more about her family and kingdom, Princess Aurora becomes determined to defeat Morgana and claim her crown. The mysterious Black Wolf is an added bonus, a handsome and mysterious outlaw who repeatedly comes to Aurora’s aid. Oomerbhoy’s fairy tale has a familiar feel: a damsel in distress, an evil villain, a handsome prince, and an assorted cast of magical beings. Some of the narrative components echo the classics; the Academy of Magic at Evolon could be Hogwarts, while the Shadow Guards are reminiscent of Tolkien’s Ring Wraiths or Rowling’s Dementors. Aurora can be a tepid heroine, uncomplicated in her internal dialogue and often slow on the uptake (she may be the only one surprised by her love interest’s true identity). Yet Oomerbhoy admirably creates her world, and the descriptions of villages and feasts are the novel’s best parts. At the library of Evolon, “wisteria had climbed the walls of the front façade, which was huge and imposing, and two additional wings led out at right angles towards the sea.” Even discouraged readers will want to wander inside.

A run-of-the-mill story in a beautifully drawn fantasy world.