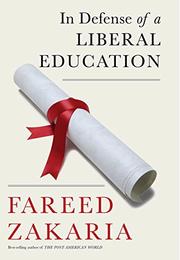 IN DEFENSE OF A LIBERAL EDUCATION

Why Americans should continue to embrace a well-rounded education.

After being accepted at Yale, Zakaria (The Post-American World: Release 2.0, 2011, etc.)—who emigrated from India, a country whose educational system is deeply rooted in the concept of learning a skill or trade rather than embracing a general education—had to decide on a course of study. Although fearful of what his Indian friends might think, he decided to major in history, a subject he was passionate about but one that was not necessarily considered useful. Zakaria implores all Americans to reconsider the idea of obtaining a liberal education, using solid evidence from Colonial days to the present to show that a liberal education is the ultimate element that separates the educational system of the United States from much of the rest of the world. America was founded on new ideas and people who didn't want to be locked into the European method of learning via specific training and/or apprenticeships. Zakaria's arguments are cohesive, and his accessible prose logically progresses as he builds his case for a type of education that opens doors that might otherwise never be discovered. "A good educational system must confront the realities of the world we live in and educate in a way that addresses them,” he writes, “rather than pretend that these challenges don't exist." A liberal education gives one the tools to be able to learn anything, whether it is science-based, technology-based, or something altogether different. It emphasizes methods of writing and speaking one's thoughts through creative endeavors and the pursuit of interests that hold attention far beyond the classroom. Zakaria adroitly points out that thanks to the Internet and online classes, the opportunity to learn anything, just about anywhere in the world, is now available to the global population, so there's no reason not to take advantage.

A passionate appeal, for Americans in particular and the world at large, to rethink the benefits of a well-rounded, general education.