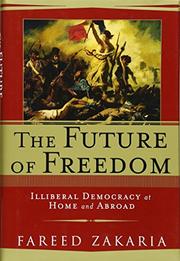 THE FUTURE OF FREEDOM

Illiberal Democracy at Home and Abroad

The problem with democracy is that it lets just about everyone have a say.

Or so would go an inelegant rendition of Newsweek International editor Zakaria’s more sophisticated argument, which is akin to those of, say, Samuel Huntington and Francis Fukuyama in the Big Idea school of political criticism. Briefly, Zakaria holds that some of the features we take for granted in democracy, such as universal adult suffrage, are recent innovations that overlie, and now threaten to obscure, far more important aspects of “constitutional liberalism—the rule of law, private property rights, and . . . separated powers and free speech and assembly.” These ideals, “best symbolized not by the mass plebiscite but the impartial judge,” are the true hallmarks of democracy, but they are not the ones that Americans, at least, think of when that golden term is uttered, and not the ones that are called to mind when the talk turns to spreading one-man, one-vote democracy around the world, which is a peculiarly American project. (“Think of it this way,” Zakaria intones, “if France had been the world’s leading power for the last century, would 18-year-olds wearing jeans in restaurants come up to you and say, ‘Hi, I’m John and I’ll be your waiter today’?”) The rest of the world, and particularly the Arab and Asian quarters, is not much interested in this power-sharing ideal—which in any event, by Zakaria’s account, so often tends to lead to the tyranny of the majority and “the erosion of liberty, the manipulation of freedom, and the decay of a common life.” Zakaria’s arguments are, of course, arguable, but they are interesting and provocative at the same time. His passing notes are more intriguing, culled from statistical tables and academic journal articles, on the material and political conditions required if a democracy of any kind is to endure: per-capita income and GDP above $6,000, an independent judiciary, an incorrupt central bank.

A fruitful argument against the politics of “simple-minded populism,” eminently worthy of consideration and debate.