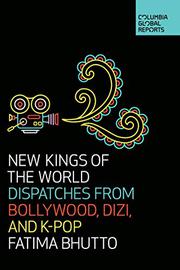 NEW KINGS OF THE WORLD

Dispatches From Bollywood, Dizi, and K-pop

A probing look at some of the shifting tides of global culture.

Having borne witness to the throes of political upheaval in her birth country of Pakistan, journalist and novelist Bhutto (The Runaways, 2018, etc.) here explores the local roots and global impact of three contemporary pop-culture game-changers: Bollywood (India), dizi (Turkey), and K-pop (South Korea). Many American readers may be surprised to learn that what’s entertaining much of the rest of the world no longer hails from Hollywood or New York but rather India, Turkey, and South Korea. In this engaging study, the author convincingly asserts that American dominance of popular culture was “facilitated by massive migration to urban areas, the rise of the middle class across the Global South, and increased connectivity”—not to mention “American military might.” Though American pop culture may have resonated with “a Third World elite,” Bhutto argues that “villagers uprooted from their homes and cultures and living in the crowded outskirts of big cities took no comfort in Sex and the City or the twangy music of Britney Spears. Instead, they turned to the products of Indian, Turkish, and Korean pop culture, whose more conservative values better aligned with “this majority’s self-image and aspirations.” Such vast, rapid urbanization, writes the author, marks a “journey from tradition to modernity…accompanied by profound turbulence” and resulting in “a geography without anchors, full of sexual and material deprivations, injustices, and inequalities.” In the wake of such global sea changes, Bhutto investigates where millions today find their cultural moorings and why. Though focusing extensively on Bollywood’s politically rooted narrative transformations and the meteoric rise of its biggest star, Shah Rukh Khan, the author also traces and analyzes the appeal of dizi—sweeping, two-plus–hour soap opera–like TV epics often adapted from Turkish literary classics—and concludes with a fascinating look at K-pop’s highly stylized production and enormous Western influence.

Witty and packed with detail, this is an intercultural shot that should be heard around the world.