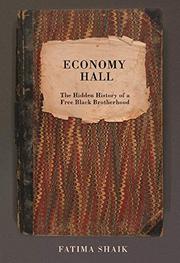 Journalist and novelist Shaik blows the dust off the ancient records of an African American society, revealing a forgotten past.

The Société d’Economie et d’Assistance Mutuelle, born in 19th-century New Orleans, was dedicated to benevolent causes of tremendous political implication, including the right of education and the franchise. Its members—all men—“rejected racism and colorism,” a natural outcome of the fact that so many of them were of mixed African and European heritage, the vaunted “Creoles” of the city’s storied past. The “Economistes” who are revealed through contemporary journals kept by official recorders—and from which Shaik works—have mostly French and Spanish surnames, but it is telling that a later president of the organization bore the name Cohen; his father was Jewish and mother, Black. As one member said in the post-Reconstruction era, the Société “should be able to receive Jews and Chinese” who applied for membership. Its headquarters destroyed by hurricanes half a century ago, the Société performed many functions: It was a place for members to gather to read, smoke, drink, play billiards, and otherwise socialize, but it was also a center for a business and intellectual community that advanced the causes of “free men of color.” That advancement met with powerful resistance, particularly after the Civil War, when lynchings and other assaults on the Black community became common as a means of terrorizing it into accepting second-class status. One particularly terrible incident involved city police officers who shot African Americans who were carrying a Union flag. Soon thereafter, the organization was almost co-opted by Whites, who founded a rival organization called, misleadingly, the Economy Mutual Aid Association. In a richly detailed, fluent narrative, Shaik sadly observes that, Reconstruction having failed dismally, many of the members of the Société took their own lives. Even so, the organization carried on to make significant contributions, including giving a young musician named Louis Armstrong a start.

A lively, readable story that nicely complicates the view of racial and ethnic relations in the South of old.