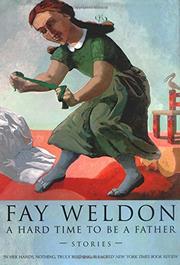 A HARD TIME TO BE A FATHER

Nineteen new stories from Weldon (Wicked Women, etc.) that, even when fragmentary, sizzle with intellectual energy and acerbic wit. Weldon is noted for her tales of the war between the sexes, a war where victory doesn—t always go to the strong or the deserving. Like a war correspondent, her dispatches from the battlefield both shock and instruct, but, as sex may be just one big cosmic joke, humor and satire often relieve the underlying bitterness. Pieces such as “Percentage Trust” and “Inspector Remorse—describe, respectively, a woman who coolly calculates every action in percentage terms during her affair with a man, whom she rightly doesn’t trust; and a married woman and art critic who sits in church on Good Friday trying to decide whether she’s a sociopath because she feels no remorse for the suicide of the wife of the artist she seduced. The wittiest story here is “What the Papers Say—: a successful model and a married movie star have an affair, which, when discovered, becomes headline news. Their careers are ruined, and their lives change in unsuspected ways, but by the time mitigating facts are revealed, other tales—of an air crash, of a royal divorce—have risen to take their place. In the title story, a mordant modern allegory, Weldon mocks bureaucratic contemporary health care, fatherhood, pop psychology, and even feminism when a prospective father faints, sickens, and is rushed to a local emergency room upon hearing the word “baby.” Other standouts detail parents’ scandalous behavior that fortuitously prevents an unsuitable marriage (—A Great Antipodean Scandal” ); a mother’s contradictory admonitions that finally make sense (—My Mother Said—); and a haunted house exorcized by the marriage of its owner to a man who feels that he has mistreated his own house (—Spirits Fly South—). Some unevenness, but always bracing and full of zest.