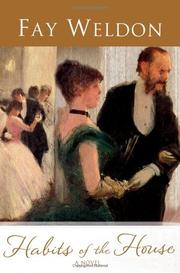 HABITS OF THE HOUSE

Prolific Weldon borrows heavily from both Downton Abbey and Upstairs Downstairs in her first in a series of three novels about Edwardian Britain, all to come out within the next year.

Weldon begins her novel over 10 years earlier than the two TV series, but the dramatic elements are the same: a wealthy family and its servants (although they get short shrift here) reacting to social, economic and political changes. In 1899, Victoria is an aging queen, her son the Prince of Wales is a philandering gambler, and the second Boer War is about to break out in southern Africa. At 17 Belgrave Square, Robert Hedleigh, the Earl of Dilberne, has an unexpected visit from his Jewish banker, Mr. Baum. Mr. Baum has lent the earl quite a bit of money, but Lady Isobel balks at extending a social invitation to Mrs. Baum in return. Now, Mr. Baum explains that the Boer situation has ruined the earl’s African mining investments. The family faces a potential financial crisis that is unlikely to be solved by the earl’s gambling forays with the Prince of Wales. Since suffragette daughter Rosina seems unmarriageable, Lady Isobel—well aware that the earl married her for her father’s money—sets out to find a rich wife for son Arthur, whose current love interests are his steam-engine automobile and the buxom blonde whose rent he pays, unaware that she was kept by his father before him. With the aid of lady’s maid Grace, who has her own romantic history with Arthur, Lady Isobel turns up Minnie O’Brien, a meatpacking heiress from Chicago recently arrived in London with her loudly American mother. Minnie is charming as well as rich; even Grace finds herself won over. But Minnie has her own secrets. Will love and Minnie’s money combine to save the household or will scandal wreak havoc?

If this all sounds more than a little familiar, it is.