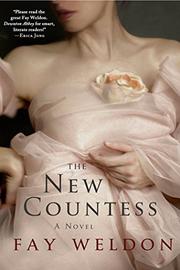 Weldon (Long Live the King, 2013, etc.) completes her Edwardian trilogy, a lightweight amalgam of Downton Abbey and her own Upstairs Downstairs, as Lord and Lady Dilberne prepare for a visit from King Edward VII.

Three years have passed since the last installment. Edward, now king, has invited himself and his entourage, including his mistress, to the Dilberne estate for a hunting weekend, much to Lady Isobel Dilberne’s chagrin. Since Lord Robert is actively involved in the government now, not to mention with his new mistress, she is the one who is burdened with installing new plumbing and heating and completely redecorating their large but antiquated home. At the moment, son Arthur, the car enthusiast, is living at the estate with his wife, Minnie, and their two young sons. Arthur married Chicago-born Minnie for love, not the money she stands to inherit from her rich but crude Irish-American parents, and despite knowing she was an “experienced” bride. But, devoted to his auto manufacturing company that has yet to produce a commercially viable vehicle, Arthur now takes Minnie for granted. Lonely, homesick for the United States and oppressed by Lady Isobel’s interference in her children’s upbringing, Minnie assumes the worst when she walks in on Arthur with a female journalist in an apparent state of undress. Minnie decamps to stay with Arthur’s sister Rosina. Recently returned from Australia a wealthy widow, with her finished manuscript on the sexual habits of the Aborigines ready to publish, Rosina has joined the literary and sexually liberated set on Fleet Street, Weldon’s satiric swipe at the Bloomsbury crowd. Will Minnie succumb to the temptations of Fleet Street or reunite with Arthur? Will Rosina find passion with her editor’s sister? Will Lady Isobel become romantically involved with the handsome, much younger police inspector assigned to arrange security in preparation for the royal visit? Will that visit end in triumph or disaster or both?

Funnier and nastier than the two earlier volumes but still lukewarm and without much fizz.