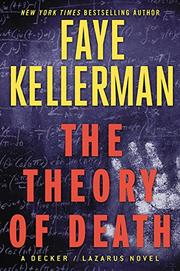 THE THEORY OF DEATH

Detective Peter Decker welcomes his insufferable former colleague Tyler McAdams, shot at the end of Murder 101 (2014), back to the Greenbury, New York, police force with open arms and violent death.

McAdams, who’s supposed to be studying for his exams at Harvard Law School, says he wants to stay with Decker and his wife, Rina, for peace and quiet and a chance to hit the books without distractions. Distractions promptly arise when Kneed Loft College senior Eli Wolf is found shot to death, his clothes piled neatly next to him, in a snowy field. A car accident six years ago that killed the friend who was driving and broke his brother Jacob’s leg scrambled Eli’s brain. Born into a Mennonite family whose rapport with each other is laconic even when they’re most demonstrative, he’s been drifting further into the world of theoretical mathematics and away from everything else. Now that Decker must question Jacob, Eli’s closemouthed parents, and his even more socially challenged mentors and friends at Kneed Loft, McAdams is eager to get in on the action—if that’s what you want to call the brightly didactic passages explaining Fourier transforms and stochastic oscillators that take the place of Rina Decker’s customary disquisitions on Jewish rituals. Fueled by the discovery of some incomprehensible papers Eli hid in his dorm room, Decker and McAdams talk to the boy's sort-of friend Mallon Euler, who turns out to have quite a crush on McAdams; Dr. Theo Rosser, Eli’s megalomaniac adviser; and paranoid Dr. Katrina Belfort, who lacks the tenure that would presumably suck her last remaining humanity from her. The discovery of a second corpse sharpens the urgency of their inquiries but does nothing to focus them, until eventually one of their several theories of the case, no more or less interesting than the others, hits home.

Move this one to the top of your list if you still pine for linear algebra. The unenlightened may want to wait and see what’s on offer next term.