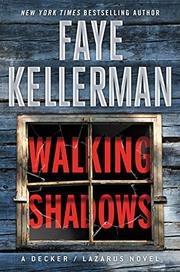 An unwelcome discovery on the grounds of an empty house brings Detective Peter Decker, who retired from the LAPD, to the allegedly quiet town of Greenbury, New York, up against a criminal plot that stretches back 20 years.

The thrill-seeking kids who smashed seven mailboxes on Canterbury Lane admit under questioning that they found the body of Brady Neil in the yard of an absent vacationer before Decker did but insist they didn’t kill him even though he also seems to have been attacked with a baseball bat. Since Decker’s not about to credit the punks with either the animus or the enterprise to have clubbed Brady to death, he has to look elsewhere. And there are so many places to look that Decker’s soon ruefully observing, “Sometimes crimes have too few pieces to solve. I have too many.” Brady’s father, Brandon Gratz, has been in prison for 20 years for robbing and killing jewelers Lydia and Glen Levine. New evidence suggests that Brandon, though clearly a lowlife, may have been innocent and that at least some of the cops in neighboring Hamilton may have known it. As he digs deeper for evidence, Decker has to walk a narrow line between antagonizing the current Hamilton police chief, Victor Baccus, whose department has access to information Decker needs, and serving as his lackey by putting his daughter, Officer Lenora Baccus, on the case. Fortunately, Lennie turns out to be an excellent detective. Unfortunately, as soon as she starts to get results, her father abruptly pulls her off. Decker continues working anyway. So does Lennie, setting up a charged relationship that’s the headline story here.

As usual, Kellerman (Killing Season, 2017, etc.) is more interested in the big scenes than in the cartilage that binds them together. The result is a methodical procedural whose method is to look everywhere, ask everything, and deal with the inevitable disappointment when the pieces just refuse to come together.