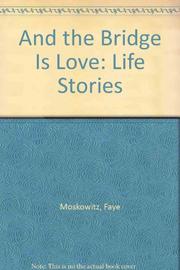 AND THE BRIDGE IS LOVE

Short-story writer Moskowitz (Whoever Finds This: I Love You, 1988) entertainingly but mawkishly divulges a few secrets from a seemingly endless font of family lore. Moskowitz writes of her Jewish childhood in Depression-era Michigan and of her adult teacher's life in Washington, D.C. She describes the death of a close friend who is stricken with cancer; the fascination she once felt for an older, elegant cousin; the attentions of a family friend who molested her when she was a child; the constant temptations she faces as a ``recovering foodaholic''; and the mixed feelings she has when her daughter marries a gentile. Her style is chatty and easygoing, with many seemingly effortless transitions from one subject to the next and with many delicious descriptions of her offbeat family: ``My grandfather in the tall black yarmulke, a stiff-necked stand-in for God''; red-headed cousin Esther ``brushing out that hair. Her head was bent over like a tulip after hard rain....'' Some of Moskowitz's essays are seriously marred, however, with an almost unbearable sentimentality. For example, when her young daughter falls and breaks a treasured china cup, Moskowitz races to her side: ``When I determined that she wasn't really hurt, I took her on my lap....`Those were only china cups, I crooned....They can be replaced. Only you, my precious, cannot be replaced.' '' And other pieces seem more like sketches than essays, ending before they've properly begun. A slight book that would have been even more enjoyable without the crocodile tears.