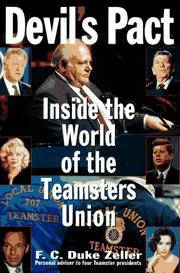 Inside the Teamster's Union

If you like tales of greed, power, sex, dirty politics, and organized crime, this is for you. Zeller, a former communications director for the Teamsters, unveils his experiences with leading figures in the Teamsters union, especially Jackie Presser. All-powerful and responsible to no one within the union, Presser embraced an apparent Teamster tradition of living up to Lord Acton's dictum that absolute power corrupts absolutely. In this world indictments, mob connections, internecine warfare, misogynist sex, and the overriding pursuit of money, money, money are simply the background, the assumed norm. For something to stand out it has to be really sensational, like tapes implicating Bobby Kennedy in the death of Marilyn Monroe, or really amazing, like Presser simultaneously holding the position of Teamster president, maintaining close contact with key figures in organized crime, and serving as an FBI informant. The story of the close, behind-the-scenes relationship between the Teamsters and the White House, including involvement in both Reagan electoral campaigns and ties to prominent Reagan administration officials, might surprise some people. After reading this volume, however, one is left feeling that the most surprising experience one could have with the Teamsters would be meeting an important officer who was actually interested in helping the membership. Zeller's veracity cannot be taken for granted, but the sheer volume of dirt being shoveled provides one assurance: If even one percent of what he relates is true, it would be sufficient. This is not a work with profound themes or insightful analysis; however, the content alone is enough to capture and keep the reader's interest.