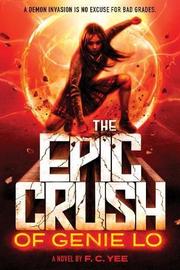 THE EPIC CRUSH OF GENIE LO

From the Genie Lo series, volume 1

A tough, self-disciplined Chinese-American teen deals with the supernatural derailing of her college-prep activities in this speculative fiction novel that draws on the folklore of the Chinese Monkey King.

In a dry, wickedly funny, first-person voice, overachiever Genie Lo easily brings readers into her corner as she puzzles with irritation over the behavior of gorgeous, goofy Quentin, newly arrived from China, who presents himself as a new student at her school and seems to think he knows her. As his story—and subsequently hers—reveals itself, it will surprise no one that the two have an extensive history together, though her actual relationship to him is a clever and fascinating detail. Genie gradually warms to him in a true-to-type romantic comedy that is filled with witty banter and valiant attempts by Genie to resist their attraction. Genie’s poignantly rendered immediate family history and incisive observations about her mostly Asian classmates and community balance the plentiful action in the battles she and Quentin undertake against a plethora of ferocious, eerily described yaoguai. Readers unfamiliar with the story of the Monkey King are easily brought up to speed early on, and the contemporary setting provides plenty of comedic juxtaposition.

An exciting, engaging, and humorous debut that will appeal widely, this wraps up neatly enough but leaves an opening for further installments—here’s hoping