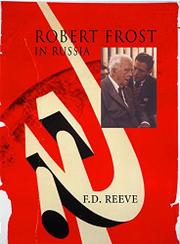 Poet and translator Reeve provides a new introduction, new photos, and very useful endnotes to his slight journalistic account of Robert Frost’s 1962 goodwill trip to the Soviet Union. Much covered by the press back then, the visit was nevertheless hardly the “last, great contribution to our common history” by the celebrated poet that Reeve declares it to have been in his fatuous introduction (“those were special times because those were special people . . .”). After rehashing the state of Frost criticism, Reeve examines the motives for Kennedy’s allowing Frost’s “vaticinal mission,” though he downplays the poet’s obvious ignorance of Soviet realities, suggesting that Frost’s hope was simply “to poeticize” international relations. Published in 1964, a year after the poet’s death, Reeve’s day-by-day account nevertheless captures the essence of the good, grumbly man-of-letters: cantankerous, insightful, highly self-conscious of public scrutiny. Reeve, at the time a young college professor brought along to translate, remains unobtrusive throughout as Frost encounters writers as voluble as the showy Yevtushenko and as reticent as the tragic Akhmatova. Kirkus admired Reeve’s understated tone and wondered at the dissonance between public perception of the Soviet terror and this bubbly chronicle, “upbeat in spirit and notational in approach.” A must, in any case, for Frost fans.