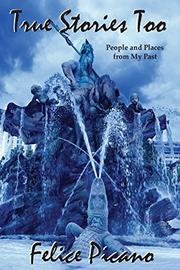 People and Places from My Past

Picano expands on the autobiographical essays of his previous book, True Stories (2011).

In this sequel, Picano reflects on family, relationships and the various cities of his past, most notably New York, where he was active in the pre- and post-Stonewall gay community of lower Manhattan. There, he took part in “ad-hoc vigilante protection squads” for gay men, enjoyed a bourgeoning literary community and frequented the seediest bars of Greenwich Village. Picano also examines in depth his relationship with his older brother, Bob. Like Picano, Bob was gay, but unlike Picano, he was struggling financially, addicted to drugs and most likely HIV-positive. In light of this, Picano revisits the tension in his early family life and his father’s “plan for feudalizing his sons” as well as his mother’s favoring the older boy above all else. These tensions forced Picano to eventually run away from home—he “led the exodus out of Queens and into Manhattan”—and perhaps to his becoming the more successful brother. This sense of success shows in Picano’s prose, as his narration can be melodramatic and boastful. He casually name-drops literary superstars such as Michel Foucault or hints at the celebrities he might have kissed in dark restaurants. He also lists the glamorous places he’s visited and the fabulous apartments he’s inhabited. But Picano keeps his stories from feeling too overindulgent through brief, carefully reconstructed moments that expertly reveal character and complex dynamics. The bittersweet last words of his soul mate or the whole of the collection’s best piece, “The ‘Nick’ Diaries,” in which his brief journal entries relate a confusing pseudo-romance with a straight man in LA—it’s in these moments that Picano’s stories become the most engaging. His writing is most moving when he’s reflecting on AIDS and HIV, a theme that connects each story and has affected so many people in his life. “When I first moved to L.A.,” he writes, “people here, eager or pleased to know me, always asked why I had moved so relatively late in life. ‘Everyone died,’ I told them.”

An intensely personal collection centered on the survivor of a fascinating, chaotic time.