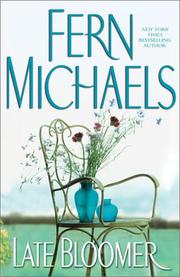 Just what did happen under the Judas tree so long ago?

Cady Jordan suffered a head injury when she flew through the air on a bicycle attached to a cable slung from the Judas tree—and, years later, she still doesn’t remember much about it. Her childhood buddies dared her to do it, and someone threw a rock that killed Jeff King, the neighborhood bully, who jumped on the bike with her at the last minute. The papers had a field day, even accusing ten-year-old Cady of killing teenaged Jeff, but the case was never resolved. Partially paralyzed for three years after the accident, Cady presently lives alone, in California, writing technical manuals for a living. Now, 20 years later, her ailing grandmother, a former movie star who took a stage name so as not to embarrass the strait-laced family, summons Cady to her Pennsylvania mansion. Cady gets a German shepherd for company and drives off to meet her legendary grandmother. Lola turns out to be quite a character, of course, at once imperious, kind, loving, self-absorbed, etc. She’s buried six husbands and is bedridden with osteoporosis, but she’s determined to help her granddaughter find happiness. When Cady’s friends hear she’s back in town, they convene to rehash the old case, well aware that they’d let everyone think Cady was the guilty party. Andy and Amy Hollister say they were throwing rocks to get Jeff away from Cady. Peter, a lawyer, doesn’t think they can prove it. Boomer Maxwell, now chief of police, gets involved, and the small town is abuzz as reporter Larry Denville digs through old clippings and investigates up a storm. At long last, the culprit feels remorse, tries to wash away the guilt under a scalding shower—and ends up in a burn ward.