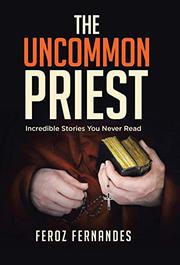 A collection of anecdotes focuses on priests and their vocation in the modern world.

In his nonfiction debut, Fernandes, a Roman Catholic missionary from Goa, India, presents readers with a series of brief stories and vignettes designed to highlight various aspects of contemporary life for Catholic seminary students, priests, and missionaries. As the author points out in his Introduction, his tales are intended as much for priests as for laypeople, emphasizing both the humanity and the adaptability that should characterize the modern priesthood. The stories he’s chosen to relate span the spectrum of emotions, dealing with whimsical, humorous details of priestly life in a parish and touching on far deeper and more profound issues. Almost all of these tales will deliver revelations to at least some parishioners, both for the reminder that priests are only human and for the glimpses into the particulars of the calling. One story tells of a bishop charged with deconsecrating a church so it could be repurposed for secular use (“It is like telling God, ‘Now you pack up and move to another place’ ”). Another relates how a couple approached their priest with the special request that a family friend, a Catholic nun, be allowed to baptize their baby (readers are reminded that in times of emergency, “the Catholic church allows anyone to baptize, even a non-Catholic or a non-Christian”). Fernandes’ writing style is simple and inviting, although his actual storytelling ability is often confusingly patchy. In one tale, for instance, a big parish benefactor who wants to hang a national flag in the church sanctuary is asked by his priest to place it in the vestibule instead. When the benefactor objects that the vestibule is too dimly lit, the priest asserts, “Have you seen it recently? The vestibule looks awesome after a recent renovation”—and that’s where the story simply stops. These narrative bumps happen often enough to be distracting. But the author’s Christian and clergy readers—and fellow missionaries—will nevertheless find much here to entertain them.

A diverting, eye-opening, but uneven look at the real lives of priests.