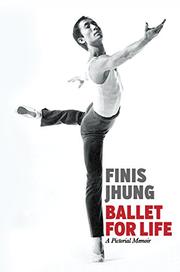 Ballet master Jhung (The Finis Jhung Ballet Technique, 2014) leaps into the spotlight with a memoir about his life and enduring career.

The Honolulu-born author says he knew that he was going to be a dancer in 1946, when he was only 9 years old. His father was Korean-American, and his mother had Scottish, English, and Korean roots; after World War II, they divorced, and Jhung’s mother struggled financially to raise him and his two brothers. Even so, the author was later able to attend the University of Utah, where he learned ballet from William F. Christensen, a founder of the San Francisco Ballet. A college friend connected Jhung with composer Richard Rodgers and lyricist/librettist Oscar Hammerstein II, and in 1960, he danced in their Broadway musical Flower Drum Song. His career took him to the San Francisco Ballet and both the Robert Joffrey Ballet and the Harkness Ballet in New York City. However, he gave it all up in 1969 to devote his life to Buddhism. By 1972, though, he’d returned to his passion and become a dance teacher. Jhung now teaches all ages and skill levels. This is an expansive memoir with many striking black-and-white photos. Jhung’s prose feels familial, as if one is sitting with him as he points to photos and remembers stories. For example, next to an image of himself dancing as a child, he writes, “If you look through the doorway behind me, you can see a wrapped gift on the bed. Could we be celebrating my mom’s wedding?” It’s a down-to-earth voice—at one point, he describes ballet as “a ‘bitchy’ art”—and some of his stories have compellingly eccentric characters, such as a Danish dancer named Lone Isaksen. Other memories, such as the death of his first child, are sharply poignant. The final chapters include a daily log of Jhung’s recovery from hip surgery and gushing student recommendations that read like ads for his classes. However, other student anecdotes are more memorable; one 67-year-old woman, told by her physical therapist that she needed to use a walker, took dance lessons instead.

Browsable inspiration for dancers of any age or physical ability.