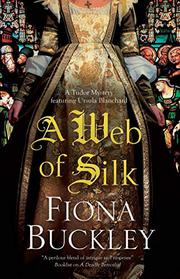 A WEB OF SILK

The fallout from a previous exploit comes back to haunt Queen Elizabeth’s half sister.

Mistress Ursula Stannard, who’d like to lead a quiet life caring for her estates and raising her son, Harry, is disturbed by a visit from Sir Robert Dudley, who tells her that he’s just sold neighboring Knoll House to widower Giles Frost, a Catholic merchant. When Ursula receives a message from Walsingham, the queen’s spymaster, she knows something unpleasant is coming her way. Before she can answer his summons, her servant Roger Brockley, her partner in many a dangerous adventure, finds his son, Philip Sandley, shot dead by a crossbow. Although Philip had been involved in the kidnapping of Harry (The Reluctant Assassin, 2018), Brockley grieves his only child and vows to find his killers. When Ursula travels to Greenwich Palace, Walsingham asks what seems like a small favor: for her to go to Knoll House with her companion, expert needlewoman Sybil Jester, and teach her new neighbor Frost’s twin daughters, Joyce and Jayne, to embroider while dropping false information about the British fleet that Frost will pass on to the Spanish. But first she must take up the problem of a stained glass window in the local church that is so gruesome that it disturbs children and parishioners alike. She hires Master Julius Stagg, a designer and creator of stained glass, to replace the window, which someone’s just broken. On a visit to the studio he shows her a magnificent chest that holds a stunning silver salt cellar he’s giving his niece Eleanor as a part of her wedding dowry. Soon thereafter, Stagg and a tearful Eleanor beg her to search for the chest, which they claim has been stolen and hidden at Knoll House. Despite her misgivings and the advice of her friends, Ursula agrees—a mistake that will put her and Brockley in far worse peril than some of her most harrowing tasks for the queen.

More cerebral than many of Ursula’s prior escapades but still an authentic Elizabethan cliffhanger.