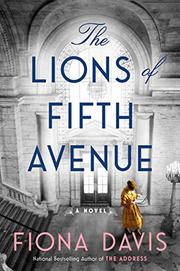 THE LIONS OF FIFTH AVENUE

Returning to her trademark depictions of historic Manhattan buildings, Davis has set her latest in the New York Public Library.

The NYPL has a special significance for three generations of the Lyons family, whose surname appears to be a nod to the institution’s sentry lions. In 1913, library superintendent Jack Lyons,  his wife, Laura, and their two children, Pearl and Harry, inhabit seven rooms on the library’s mezzanine. In alternating sections set in 1993, Sadie Donovan, Pearl's daughter, is also a library administrator, curating the Berg Collection of rare books. This collection includes mementos of Laura Lyons, whose reputation as an early feminist essayist is enjoying a resurgence. Shortly before Pearl, who lives with Sadie’s brother, Lonnie, dies at 87, she hints at a long-kept secret concerning Tamerlane, a volume of Edgar Allan Poe's poetry that disappeared from the library on Jack Lyons’ watch. As it happens, this novel is less a paean to architecture than a tale of two book heists, 80 years apart. On the continuum of crime, pilfering books—even invaluable artifacts like a first edition of Leaves of Grass, a page from a Shakespeare First Folio, the last diary Virginia Woolf kept before her suicide, and that priceless edition of Poe—ranks rather low on the thrill-o-meter. So Davis attempts to inject juicier conflicts. Laura’s struggle to get a degree from Columbia's journalism school is doomed to fail thanks to flagrant sexism (though a professor plagiarizes her thesis). Sadie, who's still reeling from a difficult divorce, is a suspect in the book thefts, as was her grandfather, Jack. The tension needle is hardly moved by flat characterizations or improbable plot developments while the writing is strictly functional: long on exposition, short on atmosphere.

A story as lively as those stone lions.