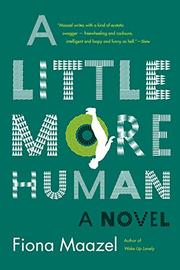 The story begins with Phil Snyder astride a horse, dressed in the blue Spandex costume of a superhero named Brainstorm. Phil is just waking up from an alcohol- and karaoke-fueled stupor, and the image is arresting—funny and pitiful at the same time. But, as the crowd assembled before him starts clamoring for autographs and photos, it’s impossible not to wonder why parents don’t shepherd their children away from a supposed superhero in tights caked in mud, blood, and algae. It’s easier to accept that Phil can actually read minds, just like Brainstorm—which he can—than it is to imagine grown people letting their youngsters anywhere near this obviously troubled imposter. This is one of the challenges of writing in the absurdist mode. How much is too much? When do readers willingly suspend disbelief, and when do they dig in their heels? Fans of Maazel’s earlier work will undoubtedly keep reading and find much to like here. Phil isn’t just an honest psychic freak who pretends to be one on the weekends. He’s also a nursing assistant at a facility that specializes in cognitive disorders and a man about to become the father of a child his wife conceived with sperm she purchased without his knowledge. For someone who can read minds, Phil is easily flummoxed, and the limits of his ability to understand anyone at all are put to the test when he’s presented with evidence that he, himself, has committed a terrible crime that he does not remember committing. Maazel gets the manifold ways in which contemporary life is ridiculous. She also understands the ways in which comedy trends toward disaster. And, finally, she’s smart enough to interrogate the ways in which comedy and tragedy are the same.

A treat for Maazel’s fans.