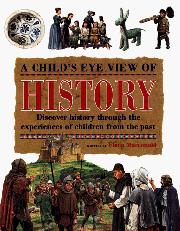 A CHILD'S EYE VIEW OF HISTORY

Discover History Through the Experiences of Children from the Past

Macdonald (First Facts About the Ancient Romans, 1997, etc.) attempts to explain past history through the experiences of children from various cultures and time periods, noting that the details of their lives did not always merit recording or preserving: “They had little money and hardly any power, so few writers or artists thought it worthwhile to record their lives.” Every spread, arranged roughly chronologically, describes a different topic or culture, e.g., “Ancient Egypt,” “Toys and Games,” “The Children’s Crusade,” “Benin,” “The French Revolution,” etc. A sidebar covers a particular child from that place and time, among them, Princess Amat al-Aziz of Baghdad, a.d. 758, who “had the deepest desire to do good”; Egil Skallagrimsson, a young Icelander who killed his playmate at age six; Nathan Field, an actor with Shakespeare’s troupe; and Anne Frank, who may be the most famous child of WWII, an era otherwise given sparse treatment. Full-color drawings by five artists, historical photographs, and thumb-sized world maps accompany a text that runs between understatement and exaggeration; Macdonald’s idea is certainly a good one, but it may be that the coverage, attempting uniformity where none exists, is simply too uneven. (chronology, glossary, index) (Nonfiction. 10-12)