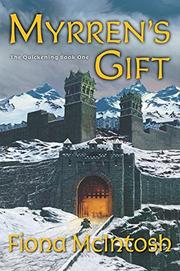 The Quickening, Book One

First of a fantasy trilogy from Down Under.

When 14-year-old Wyl Thirsk’s father dies defending King Magnus of Morgravia, Wyl must take up his hereditary duties as leader of the army. Unfortunately, Crown Prince Celimus is devious and arrogant, and constantly seeks to humiliate honest Wyl. Celimus orders the death by torture of accused witch Myrren, whose chief fault is that her eyes are different colors. Wyl, forced to witness the horror, admires how bravely Myrren meets her doom. As he offers her water, Myrren bequeaths Wyl her huge dog, Knave—and, dying, bestows another, unknown gift upon Wyl. Soon, Wyl acquires a friend: bright, loyal sewer-cleaner Fynch with his odd affinity for Knave—generally hostile, the dog is clearly much more than just very smart. Some time later, as Magnus lies dying, Celimus conceives the perfect way to rid himself of Wyl and achieve his ambition of conquering neighboring Briavel. He orders Wyl to arrange a marriage between Celimus and Princess Valentyna, threatening to torture Wyl’s beloved sister Ylena if he doesn’t cooperate. Wyl’s companions, though, are mercenaries whose leader, Romen Koreldy, has orders to murder Wyl. But Wyl, falling instantly in love with Valentyna, reveals Celimus’ plots to King Valor. Inevitably, Wyl must fight Koreldy for his life, though the pair make a blood pact that the survivor will protect Ylena; and only as Koreldy’s blade cuts into his heart does Wyl begin to understand the true nature of Myrren’s gift.