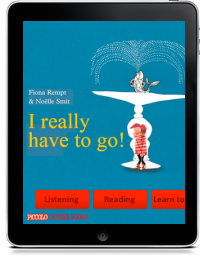 I REALLY HAVE TO GO!

Bladder pressure drives a lad to desperate measures in this short but suspenseful import.

Weighing in at just 12 pages, young Brian’s increasingly frantic quest for relief nonetheless gushes with hilarity. His ride from school is cut short by a flat tire, both the “toilet” and the “bathroom” at home are occupied, the neighbors can’t hear him and he gets a hostile reception from a prickly bush. At last a tree that a dog is also watering provides a spot for sweet relief—followed by public embarrassment when he turns prematurely to watch a parade marching into view. Originally published in 2009 in the Netherlands, this digital version offers both text and (optional) audio narration in five languages, plus word-by-word highlighting. The conversion isn’t seamless, as each urban scene (done, appropriately, in watercolors) takes up a screen and a half and has to be dragged from side to side to be viewed in its entirety. Still, navigation is easy. Brian is discreetly angled in the cartoon art, and a continuing track of music or quiet urban noises (enhanced by several touch-activated sounds and small animations in each scene) backs up a comically expressive narration.

Look for winces of sympathy and steady streams of laughter from young readers.