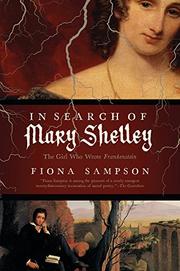 IN SEARCH OF MARY SHELLEY

The Girl Who Wrote Frankenstein

A fresh biography of Mary Shelley (1797-1851), who created the monster that has become “part of our shared imagination.”

Mary’s mother, Mary Wollstonecraft, died just after she was born, leaving her and her older, illegitimate sister, Fanny, to be raised by her father, William Godwin. Since her parents were two of the leading political philosophers of the time, Mary received a fine education in the humanities, developing her reasoning skills. Godwin was also an anarchist and utilitarian who seemed to approve of the Romantic poets and free love—except for Percy Shelley. As his protégé, Shelley met Mary when she was 16, and he was married with a pregnant wife. They soon ran off to Europe and took Mary’s stepsister, Jane, with them. Throughout the marriage, they shared their talents and supported and encouraged each other. But Shelley handled money poorly, and they soon had to return to London to the first of innumerable homes throughout Europe. Jane, who soon changed her name to Claire, met and fell for Lord Byron and persuaded Percy and Mary to meet up with him at Lake Geneva. As Sampson (Lyric Cousins: Poetry and Musical Form, 2016, etc.) shows in this perceptive biography, it was there that Frankenstein was born, with Byron’s challenge to write ghost stories. Begun when she was 19, Mary’s novel, often considered the first work of science fiction, was finished and published before she was 21. With it, she changed the face of fiction, revealing the experimental spirit of the Romantic period. Unfortunately, their marriage was also experimental and filled with inequities. Shelley was a firm believer in free love, particularly for himself. After a series of pregnancies and only one surviving child, Mary still believed in their love, even more so after his death. Throughout, Sampson demonstrates why the story of Shelley and Frankenstein remains so intriguing, even today.

The author deftly plumbs the depths of Mary’s psyche to enlighten us about both Shelleys and reveal the profound effects they had on each other.