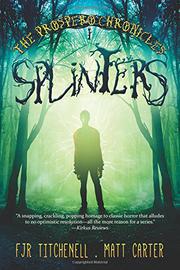 From the Prospero Chronicles series, volume 1

Trust is a fickle commodity in a Northern California town being slowly ingested by shape-shifting intergalactic parasites.

When 16-year-old Ben’s childhood friend Haley is presumed dead, fatherless Ben and his mother pack up again and head to Haley’s hometown of Prospero, California, to pay condolences and find a new place to stay. Prospero’s paranormal reputation is made a shade weirder at Haley’s memorial service when Ben meets redheaded, overtly peculiar 16-year-old Mina Todd. Mina warns Ben that it’s not really his friend that’s missing but rather one of many shape-shifting alien impostors called Splinters. Mina is a “Splinter resistor,” and she asks him to help her spy on, stalk and destroy the growing Splinter population. A Splinter attack on the mismatched duo (Mina is a creature of logic and deduction; Ben is a charming kid with “heartthrob hair”) convinces Ben to join her. Written by a husband-wife duo who admit an affinity for horror films in their dedication, this dual narrative from Ben’s and Mina’s perspectives has horror’s classic backdrop of small-town creepiness. One welcome difference to the archetypal “final girl” formula of flaxen hair and virginal naïveté is that Mina is tough, possibly insane, definitely brilliant, and has already been terrorized and tormented by the body-snatching Splinters long before the story begins.

A snapping, crackling, popping homage to classic horror that alludes to no optimistic resolution—all the more reason for a series.