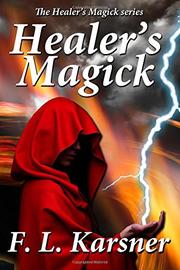 Adventure abounds in the Scottish Highlands in Karsner’s debut novel, in which a special woman with untapped elemental powers tries to stay one step ahead of a ruthless soldier bent on exacting revenge.

As far as the flame-haired Caitlin realizes, she’s just a regular woman with a penchant for caring for the sick and injured people of her village. She feels nothing mystical about her predilections; instead, she’s more inclined to wonder what the practicing physicians down in Edinburgh are doing. Her enigmatic, eccentric old Uncle Wabi, back on the Isle of Skye, always seemed capable of conversing with animals, but Caitlin doesn’t think much of it. That slowly begins to change, however, when she’s called on to care for the young men returning home from the bloody Battle of Culloden. The members of the powerful MacKinnon clan become allies with Caitlin after she manages to save their younger brother Ian from a terrible ax wound sustained on behalf of “The Bonnie Prince.” Caitlin, however, is no match for an outbreak of malaria that claims the lives of another group of soldiers placed in her care. Convinced that his brave son died at the hands of a witch, the evil Cmdr. Campbell, in a murderous rage, swears vengeance on Caitlin; the innocent healer only narrowly manages to escape after summoning up some hitherto unknown abilities. Overall, this is a mostly charming tale of magic and mages. Karsner works quickly and efficiently to establish her principal players, which also include a pregnant noblewoman on the run and a sinister landowner bent on retrieving her. Before readers can say “abracadabra,” Caitlin befriends an injured wolf cub while she’s on the run and sets up shop inside a mysterious cave hidden deep in the woods. Although the story’s tone is heavily sweet and innocent, the author still manages to imbue the simple plot with a real sense of tension and suspense.

The first in a promising series filled with likable characters and fun adventures.