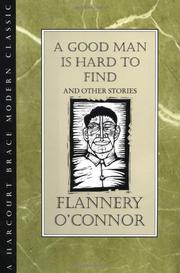 A GOOD MAN IS HARD TO FIND AND OTHER STORIES

This collection of short stories by the southerner whose first novel Wise Blood appeared in 1952 is more likely to attract readers who want to follow Miss O'Connor's writing progress rather than those who favor fiction in this form. Miss O'Connor is not really a short story writer. She seems to need more space to develop her characters and to point this up- her best story is the longest in the book, The Displaced Person. In this, a southern farm is seen as a community of uprooted people- all fighting for security in their own ways, and a kind of understanding and sympathy is developed for each with tragic success. The River, the ironic fragment- A Stroke of Good Fortune- and A Circle in the Fire (second prize in Doubleday's Prize Stories 1955 collection) are among the best here, while some- including the title story- are the skimpiest of sketches, and again still others do not have room enough to develop beyond what it seems was in the author's mind. Many of these have appeared in the Kenyor Review. Harper's Bazaar, and the New Yorker, and will cater to eclectic tastes.