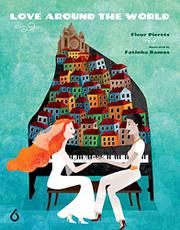 LOVE AROUND THE WORLD

When Fleur and Julian fall in love and decide to get married, they discover that because they are both women, this is possible in only 28 of the world’s 195 countries. They decide to travel around the world to celebrate their nuptials in each of these nations, starting with Julian’s native Netherlands. Each subsequent spread depicts the women in different countries that sanction and affirm their union: the U.S., Brazil, Australia, France, Belgium, Ireland, Portugal, Canada, Spain, Iceland, Finland, and Mexico. Each spread shows Fleur and Julian joyfully celebrating in festive settings, often with other couples around them. The art has a graphic, flat quality that makes the most of the rainbow palette in scenes that could translate to postcard or poster images, and the text highlighting fairness, safety, and pride helps make the adult institution of marriage accessible to young readers. While the concluding scene leaves readers on a hopeful note, with the happy couple determined to travel to the other 15 countries, the backmatter shows a photograph of the real couple and reveals that Julian died of brain cancer shortly after they began their wedding tour around the world. This book realizes their dream.