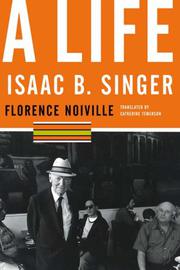 The life of the late, great Yiddish writer (1904–91), as analyzed by a French journalist and recalled by Singer’s relatives, friends, translators, biographers, critics and literary peers.

Noiville leans heavily on both Singer’s lucid autobiographies and the testimony of such witnesses in depicting the odyssey of a deeply conflicted Jew whose experience of his family’s zealous religiosity and the terrors of two world wars estranged him from his origins. The roots of his complicated sensibility are shown to lie in insistent memories of his fervent (and somewhat ridiculous) rabbi father, powerful pragmatic mother, elder sister Hinde Esther (herself a novelist) and especially his older brother Israel Joshua, a bestselling author who paved the way for his younger sibling’s eventual literary conquest of America (to which Isaac immigrated in 1945). Noiville stresses Singer’s fascination with Jewish folklore and supernaturalism, persuasively linking it to his indifference to religious tradition and his dispassionate fatalism—traits that, when expressed in his fiction, offended Jewish intellectuals far more preoccupied than he with their people’s communal experience of persecution, diaspora and genocide. (The apostate’s lifelong womanizing, indifferent fatherhood and calculating career moves were also frowned upon.) Yet Singer came unforgettably into his own in richly imagined tales of imps and dybbuks, ingenuous everymen and satanic tempters, faithful spouses and cynical adulterers: a roiling gallery of clamoring humanity captured in fabulist stories (“Gimpel the Fool,” “The Spinoza of Market Street”), breathlessly readable novels (The Magician of Lublin, Enemies) and the still-underrated serial autobiography begun with the brilliant In My Father’s Court. Still, dualities and contradictions plagued him to the end, climaxing with a 1978 Nobel Prize, universal adulation and his sad final years endured in the bewildering grip of Alzheimer’s disease.

Despite an annoying fondness for rhetorical questions and barely serviceable prose, Noiville gets the story told, and Singer’s is a good, dark, paradoxical one.