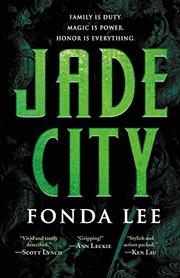 Two clans fueled by the magical power of jade battle for control of an analog of mid-20th-century Hong Kong.

Clan soldiers have a specific genetic affinity for jade not shared by most outsiders, which grants them strength and shielding, among other magical powers. Kaul Sen, the former Pillar (head) of the No Peak clan, has retired, and the new Pillar, Kaul Lan, doesn’t quite inspire the fear and loyalty garnered by his legendary grandfather or his late war hero father. His younger brother, Kaul Hilo, is an effective Horn (chief enforcer), but he’s also rash and impulsive. Sensing weakness in her rival, Ayt Madashi, the ruthless Pillar of the Mountain clan, begins a campaign to destroy No Peak and take total control of the island nation of Kekon. The setting suggests that this crime-thriller/fantasy might find inspiration in history and fiction about the triads, and perhaps it does, but it also clearly leans heavily on elements drawn from The Godfather. Some examples (beyond the general plot of crime families battling for supremacy): an adoptive member of the Kaul family is kidnapped by the Mountain to serve as intermediary; the Mountain wants to sell drugs and initially seeks No Peak’s help with the business; the character of Hilo bears some similarity to Sonny Corleone, while the third Kaul grandchild, Shae, traces part of the path of Michael Corleone (she’s spent years outside the clan pursuing her own interests but her loyalties drag her back when tragedy strikes). Despite those beats, Lee's (Exo, 2017, etc.) novel has its own story to tell; an intriguing confluence of history, culture, and biology shapes both the characters and their fates.

The open-ended nature of the ending suggests that the clan war is not yet over; it’ll be interesting to see what course Lee charts next.