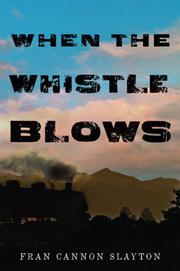 WHEN THE WHISTLE BLOWS

Set in a railroad town in West Virginia in the 1940s, these quaint and compelling short stories, which together function as a novel, tell the engrossing tale of young Jimmy Cannon, who is growing from boy to man at the very same time that the most important elements in his life—his father and the steam-engine trains he has loved since childhood—are chugging toward their last breaths. The stories, taking place on a series of seven All Hallow’s Eves, follow Jimmy as he engages in childish pranks, plays in the championship football game, spies on the secret railroad society that his father and brothers belong to and finally is inducted into that society after his father’s death. Ultimately, Jimmy learns to accept that the days of the steam engine are over, to better understand his emotionally distant father and to embrace his role as newest member of his father’s society, which turns out to be centered not on the railroad after all, but on faith, brotherhood and love. An unassuming masterpiece. (Historical fiction. 10 & up)