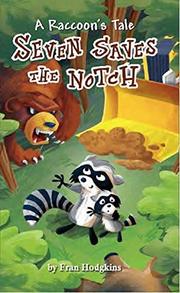 After her home is destroyed, a raccoon embarks on a dangerous journey to find the safe haven foretold in legend in this illustrated children’s book.

Seven-Rings Moon, called Seven for short, is a young raccoon who lives happily with her mother and siblings in an old, abandoned church. One day, though, a big yellow machine comes to tear down the building, and Seven and her sister, Arnica, barely manage to escape. When they stop running, their mother and brother are nowhere to be found. They find their grandfather Greyson, who relates a legend: “In a month in which there is a copper-colored moon, a raccoon with seven black rings on its tail will be born”—just like Seven. Greyson tells her she must travel to a “safe place for the creatures of the woods and the birds of the air” called the Notch. “It’s your destiny,” he says. “You’re not only meant to go there, Seven. You’re also meant to save it, to stop those who would destroy it.” Seven doubts that a little raccoon like her can do anything, but Greyson assures her that she can and must. An odyssey filled with many adventures and perils ensues, giving Seven a chance to sharpen her wits by concocting clever schemes. She also gains allies who know of and support her quest, such as a bobcat, a Newfoundland dog, and a pair of voluble gray squirrels. Working together, they can perhaps find a way to defeat the men and their machines that threaten the Notch. Hodgkins (Little Loon, 2015, etc.) offers an exciting, well-written tale that’s especially moving for its vision of a peaceable kingdom in which predators and prey cooperate against the real enemy: habitat loss and human greed. Another plus is that the author’s animal characters act (more or less) like animals rather than being disguised human beings. There are echoes of Richard Adams’ Watership Down in the creatures’ stories and in an authoritarian raccoon community that’s a mild version of Efrafra, but Hodgkins makes this tale her own. Though the environmental message is clear, the book isn’t preachy (it’s often very funny) and shows how some humans do care about and work for animals.

A rousing, feel-good animal story of courage and compassion—a winner.