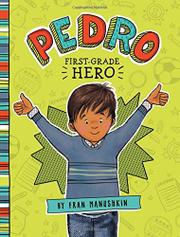 From the Pedro series, volume 1

The creators of the Katie Woo series turn their focus to a peripheral character, first-grader Pedro—Katie’s friend and schoolmate.

Four short chapters—“Pedro Goes Buggy,” “Pedro’s Big Goal,” “Pedro’s Mystery Club,” and “Pedro For President”—highlight a Latino main character surrounded by a superbly diverse cast. At times unsure of himself, Pedro is extremely likable, for he wants to do his best and is a fair friend. He consistently comes out on top, even when his younger brother releases all the bugs he’s captured for a class assignment or when self-assured bully Roddy tries to unite opposition to Pedro’s female opponent (Katie Woo) in the race for first-grade class president. Using a third-person, past-tense narrative voice, Manushkin expands her repertoire by adding a hero comparable to EllRay Jakes. What is refreshing about the book is that for the most part, aside from Roddy’s gender-based bullying, the book overcomes boy-girl stereotypes: girls and boys play soccer, boys and girls run for president, girls and boys hunt for bugs, all setting a progressive standard for chapter books. With mixed-media illustrations featuring colorful bugs, soccer action, a mystery hunt, and a presidential campaign, Lyon’s attention to detail in color and facial expressions complements the story nicely.