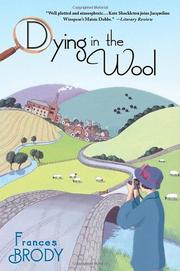 DYING IN THE WOOL

A World War I widow takes up sleuthing.

Although Kate Shackleton’s husband is listed as MIA, she hasn’t given up hope. Meanwhile, she’s assisted others in locating their family members. But she’s reluctant to help her fellow VAD friend Tabitha Braithwaite find her missing father, mill owner Joshua Braithwaite. Tabitha, who’s soon to marry a much-younger man, would love to have her father walk her down the aisle, but Joshua went missing soon after he was hospitalized following a supposed suicide attempt. Even though his son had just been killed in action, he vehemently denied trying to kill himself. And why would he have tried? His mill was minting money from war contracts, and he still enjoyed quite a reputation as a ladies’ man. Kate’s father, a high-ranking policeman, suggests that since time is short and Tabitha is paying her, she should hire former police officer Jim Sykes to help with the legwork. Kate’s investigations turn up many secrets past and present that people would prefer to remain hidden. When several people die in staged accidents, it’s clear that Kate must find the killer before he strikes again.

The first in a planned series introduces a refreshingly complex heroine and adds a fine feeling for the postwar period.