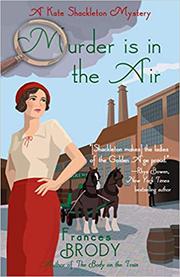 MURDER IS IN THE AIR

A muddle at a Yorkshire brewery in 1930 forces two private detectives to venture above and beyond their normal activities.

It’s not immediately clear what William Lofthouse, owner of the Barleycorn Brewery, wants of Kate Shackleton. To be sure, his nephew James, groomed as his successor, has been away in Germany longer than he ought. What’s really worrying William, though, is having the business in tiptop shape when James does return. To that end, he asks Kate’s fellow detective Jim Sykes to come to the brewery and uncover the reasons for a lot of minor problems that add up to big trouble. The establishment is supporting wages clerk Ruth Parnaby, whose brother and troubled father also work there, in a Brewery Queen contest. William’s secretary, Miss Crawford, knows everything there is to know about the business, but before she can disclose something important to William, she’s run over and killed in a hit-and-run that’s clearly no accident. Kate and Jim soon discover that someone’s been working against the brewery’s interests, and they fear that William will be shocked and disappointed. Taking over as mentor to Ruth after Miss Crawford’s murder, Kate realizes that Ruth’s mother has been hiding away from her husband for years in fear for her life. The murder of a second brewery employee starts to weave the strands that finally come together in a surprising denouement.

Britain between the wars provides the backdrop for murder and an engrossing look at women’s place in society.