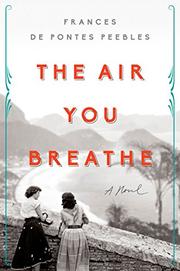 THE AIR YOU BREATHE

Samba music and its allure beats beneath this winding and sinuous tale of ambition, memory, and identity.

The long road to musical stardom followed by the privileged Graça, a Brazilian woman from a wealthy family with stakes in the brutal sugar-cane industry, runs parallel to that taken by her childhood friend and rival, Dores, the child of a promiscuous local woman who was taken in at birth by the plantation’s cook. Peebles (The Seamstress, 2008) traces the girls’ growing attachment to each other—despite divisive class distinctions in early-20th-century Brazil—and their growing enchantment with the samba style of music they first heard on the plantation before their joint escape. Their extended sojourn in the gritty and hedonistic Lapa neighborhood of Rio exposes the girls to privations and degradations but also allows them to enter the world of music they both yearn to conquer. Differences in talent and temperament strain their relationship, but shared ambition propels them toward unlikely levels of fame and notoriety as Graça transforms into Sofia Salvador, an international samba star (whose life experiences may echo those of Carmen Miranda). Alliances, romances, and friendships made by the women over the courses of their lives shift and reform as the girls from the plantation pursue pop stardom. Questions of loyalty to family, culture, and self are not always resolved in a comfortable fashion, and the scarifying price for achieving one’s dreams runs far beyond the girls’ childhood imaginations. From the perspective of old age, Dores’ recounting of the duo’s experiences is steeped in melancholy but also alludes to the unreliability of memory (and the necessity of forgetting in order to survive).

Peebles’ detailed and atmospheric story is cinematic in scope, panoramic in view, and lyrical in tone.