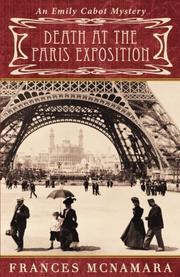 DEATH AT THE PARIS EXPOSITION

The 1900 Paris Exposition provides a glittering backdrop for murder, theft, and high fashion.

Emily Chapman considers herself very fortunate to be in Paris, along with her physician husband and children, as the social secretary for Mrs. Bertha Palmer. Emily never imagined visiting the House of Worth, where Mrs. Palmer has insisted on buying her a costume while ordering her own magnificent wardrobe, fit for the only female commissioner representing the U.S. They’re accompanied by Honoré Palmer and his friend Lord James Lawford, who are transporting Mrs. Palmer’s valuable pearl necklace. Others visiting the same day are wealthy Mrs. Johnstone, her daughter, and two friends, well-known artist Mary Cassatt, and the Countess Olga Zugenev, and her daughter, Sonya. When Mrs. Palmer’s pearls go missing, she’s reluctant to make a fuss until another valuable jewel is stolen at a party celebrating the engagement of M. Worth’s daughter to a son of the house of Cartier. The next day the family meets Inspector Guillaume, who had a similar experience in 1889 with a clever gang of jewel thieves, a gang whose ringleader was never caught. The Palmer pearls turn up on a mannequin at a House of Worth exhibit along with the dead body of a young woman who occasionally worked for Worth. Since the Inspector seems determined to suspect Honoré, Mrs. Palmer, who knows that Emily has solved crimes in the past (Death at Chinatown, 2014, etc.), asks her to prove him innocent. Although she speaks almost no French, Emily can hardly refuse. A second death only spurs her on to help the Palmer family.

Historical detail, intriguing real-life characters, and a complex mystery are nearly overwhelmed by detailed descriptions of period attire that only a hard-core fashionista could love.