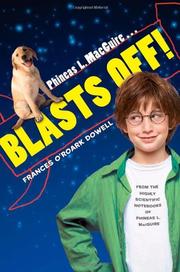 Hoping to earn enough money for a week at Space Camp in Alabama, fourth-grader Phineas MacGuire takes a job as a dog walker—a ready-made opportunity for a budding scientist. With his friends Ben and Aretha, he collects dog saliva to measure and compare with that of other dogs and, eventually, humans as well. In this third episode of The Highly Scientific Notebooks of Phineas L. MacGuire, Dowell follows her previous pattern, making good use of the humorous possibilities of licking, slobbering dogs, but also including a pair of experiments that relate to current Mars exploration and Mac’s new interest in space. (Instructions are included at the end.) Supportive parents, neighbors and school personnel encourage this engaging and resourceful protagonist. The first-person narrative moves along briskly, and the large, legible type and McDaniels’s numerous black-and-white illustrations add to the appeal for hesitant readers. Although there are references to his previous experiments with volcanoes and slime mold, this easily stands on its own and should attract new fans for the series. (Fiction. 8-11)