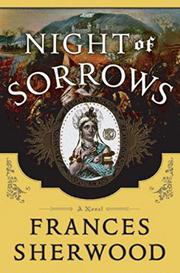 Amid the splendor and savagery of 16th-century Mexico, an epic drama unfolds, featuring bloody Uixachtecatl and a colonizing Christ, a lush culture and its civilizing barbarians, an Aztec princess and the ultimate conquistador, Hernán Cortés.

Malintzin is cunning. And she’s right to be, for Sherwood (Vindication, 2003) puts her heroine through incredible ordeals in this sweeping historical novel. Born a blueblood to the Children of the Sun, at nine years old, she’s ripped from her beloved father barely days after his funeral and sold into Mayan slavery. She’d lived large once, feeding on dog and weasel in the shadow of Aztec altars whereon sacrificial victims surrendered their hearts to the stroke of a flint knife; she now eats worms. She befriends Cuy, another slave who has been “beautified” in Mayan fashion: her forehead elongated by flattening boards and her eyes forced to cross. As young women, the pair are enslaved once more, by Spaniards who carry thunder sticks that belch lethal balls, ride monster horses and, to the Native Americans, smell like dogs. The invaders’ ways are bizarre, especially those of their weak and tortured god. As Malintzin insists: “People sacrificed themselves to the gods”—not the other way around. In time, just as he possesses her land and sets out, armor clanging, for a showdown with mighty Moctezuma, Cortés possesses Malintzin. He’s a complex, conflicted figure, drunk on the fact that the conquered mistake him for the god Questzalcoatl but riddled himself with doubt. As Sherwood paints her large-canvas masterpiece, she’s a properly revisionist historian in seeing the proto-imperialist Spaniards as significantly ambiguous heroes; also, she doesn’t romanticize the Aztecs or Mayans—human sacrifice being, after all, a pretty hard sell. Instead, she gives us culture clash in all its realistically burning heat.